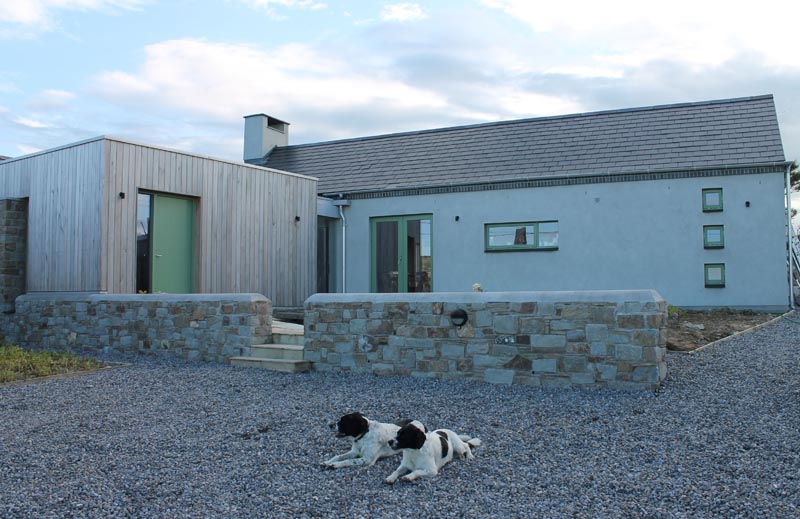 Rejuvenation of an existing farmyard and its building stock to provide a contemporary family home.

The farmyard and house has been in our client’s family for many generations, however the original family dwelling had become derelict and had not been occupied as a house for a generation. Unfortunately the condition of the original family dwelling, originally a sod cottage, has deteriorated to such an extent that it had become derelict and was not suitable for re-use.

The house had reached such a state of disrepair and overgrowth that it is not recorded on the more recent Ordnance Survey map.

The buildings on the site had since been used as support to the farm activities and the proposals allowed for the renovation of the large majority of the building stock on site, as the client moved back to live and work on the farm.

The project allowed for what remained of the sod cottage to be demolished and replaced with a new dwelling of similar size and scale and to match the eaves and roof profile of the previous building. The heights and profile of the renovated buildings on site are also maintained as existing. The majority of the building stock involved was farmyard and outbuildings and these were carefully renovated in line with best conservation practice.

To fully utilise the potential of the existing buildings and their interaction with the new building, contemporary link interventions are provided between the two elements.

This allows the existing elements to be read clearly while providing a holistic design solution uniting the original buildings and the contemporary interventions. The emphasis in the design approach is on the minimum intervention possible to the existing building stock and the maximum re-use of the existing conditions and materials on site to provide a sustainable home for our clients. The house has been designed to take account of the local vernacular tradition which exists in the Kilfarrasy area. The scale and design of the proposed elements have been set to be appropriate to this vernacular tradition and setting. The house maximises the existing site orientation and the surrounding landscape in which it is located.

The house has been designed to utilise the vernacular clustered building forms which are the tradition of this area, and with the natural orientation and shelter of the buildings in mind. These design considerations are a key element of the sustainable environmental policy for this house. The sustainable policy utilised on this project can best be described as minimal impact. The buildings are small forms which can be built using either renewable, i.e. timber, or traditional local building methods. The scale of the buildings and therefore the spans of the structure and technology involved, are what would be typical of this area and of the history of vernacular building in Ireland. As such, no building systems solution is required for this building and it can be built using both local skills and materials wherever possible.

The most has been made of the orientation to allow for minimal heat loss through the building and also maximise passive solar gain.

The design proposals intend to re-use both the existing building stock and existing materials which are available on site and to provide a sustainable future for this brown field site, as a working farm and a family home.

The material pallet which has been selected includes, in the majority, materials, which are the vernacular materials for this area including: nap/lime plaster render finish; the use of natural slates and metal to roof surfaces; the use of natural stone walls to the garden walls of the house; and the use of timber to the joinery elements of the house, which would have been used typically on vernacular farmhouses. It is reused on the new house in both the traditional and also in an innovative, yet complimentary way. 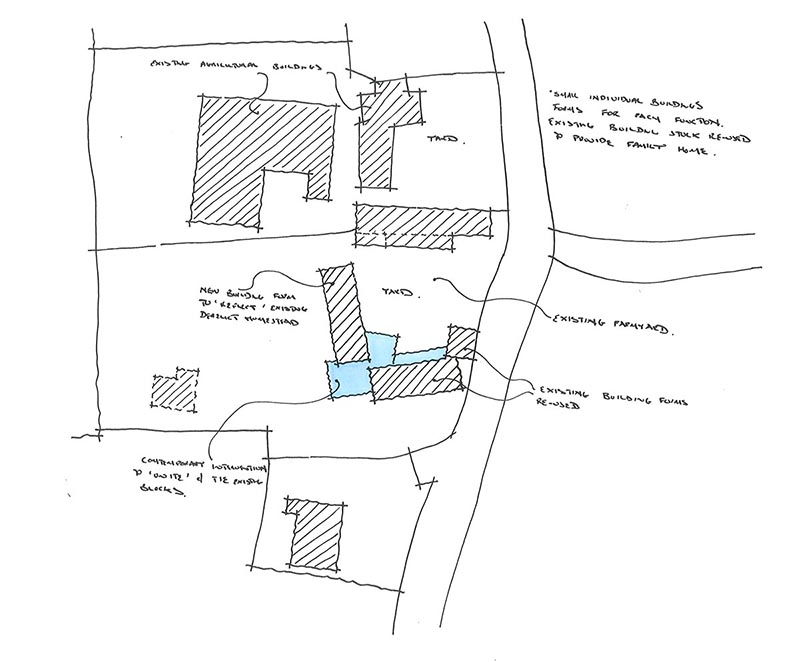 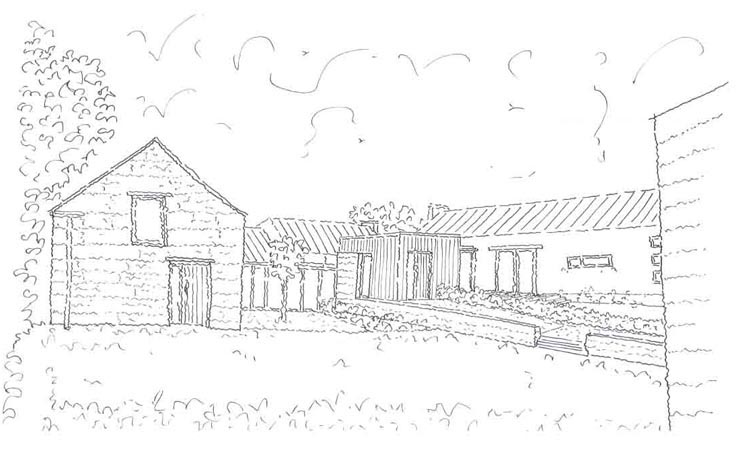 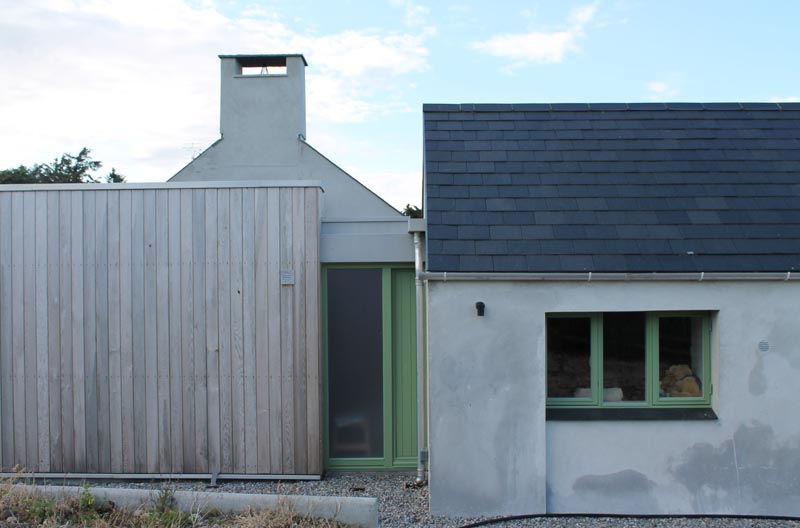 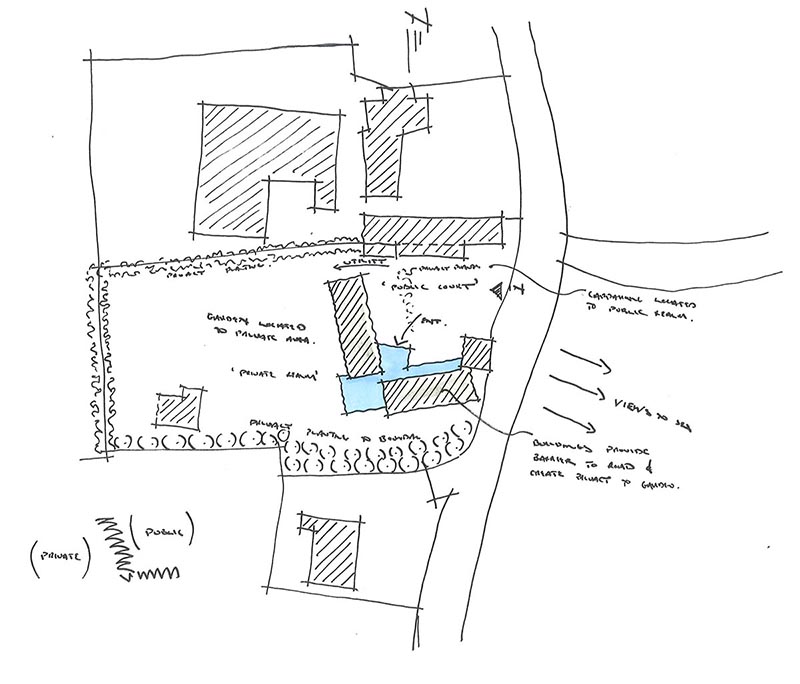 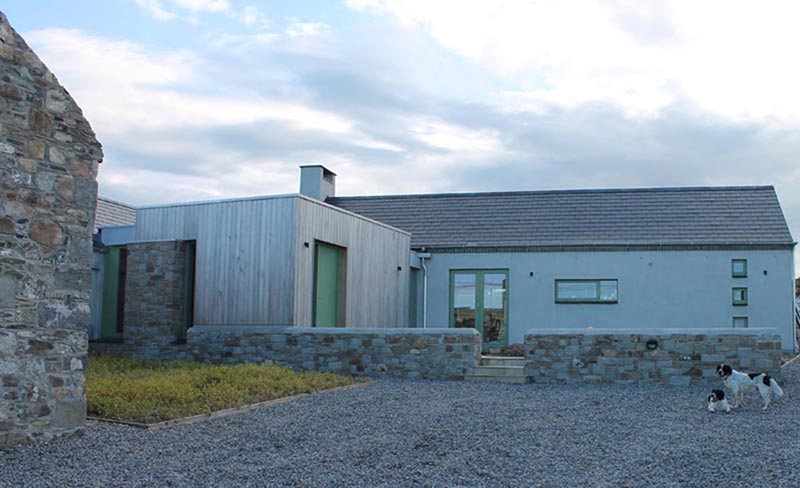 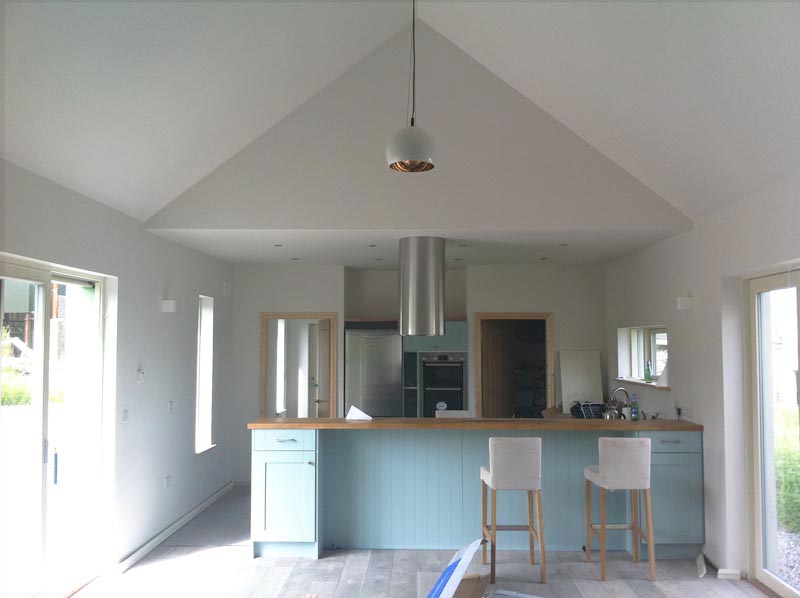 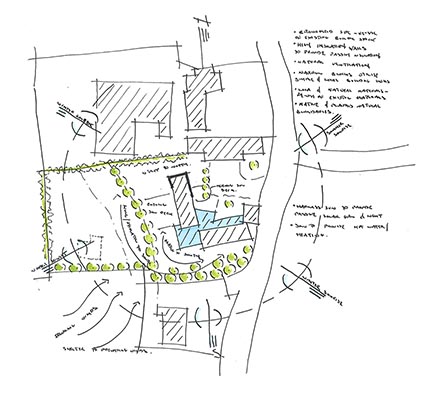 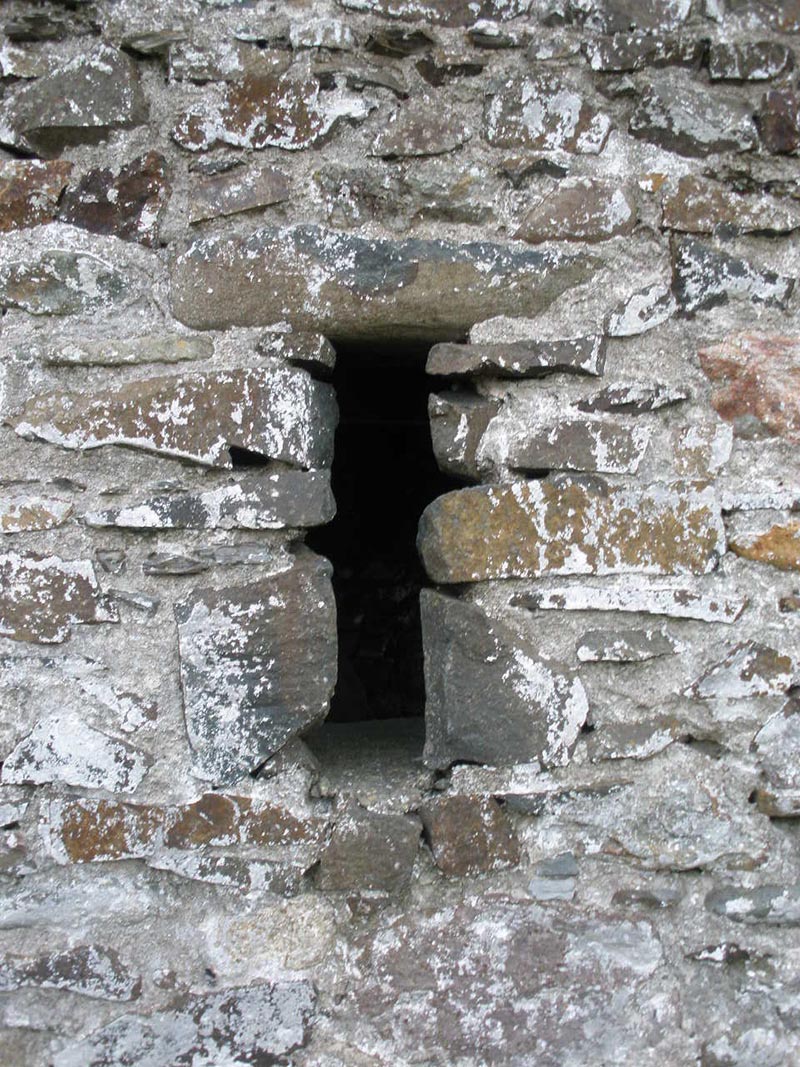 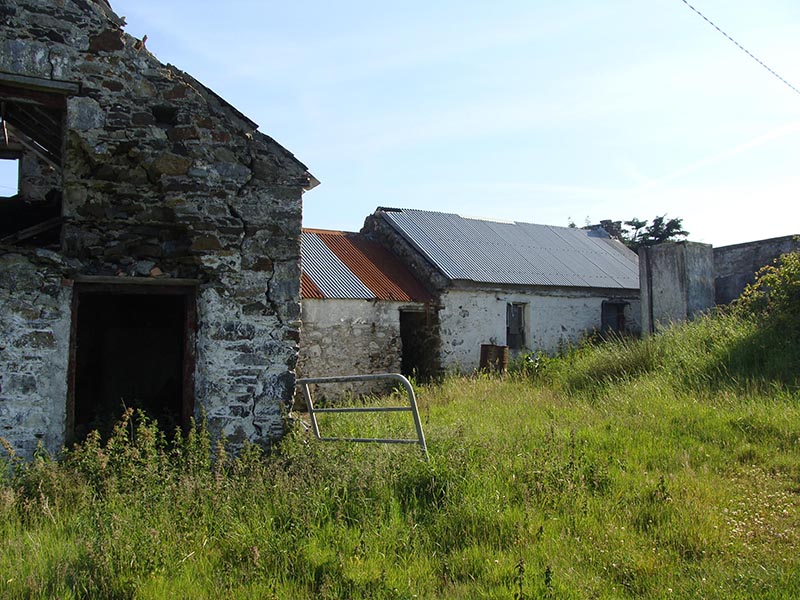 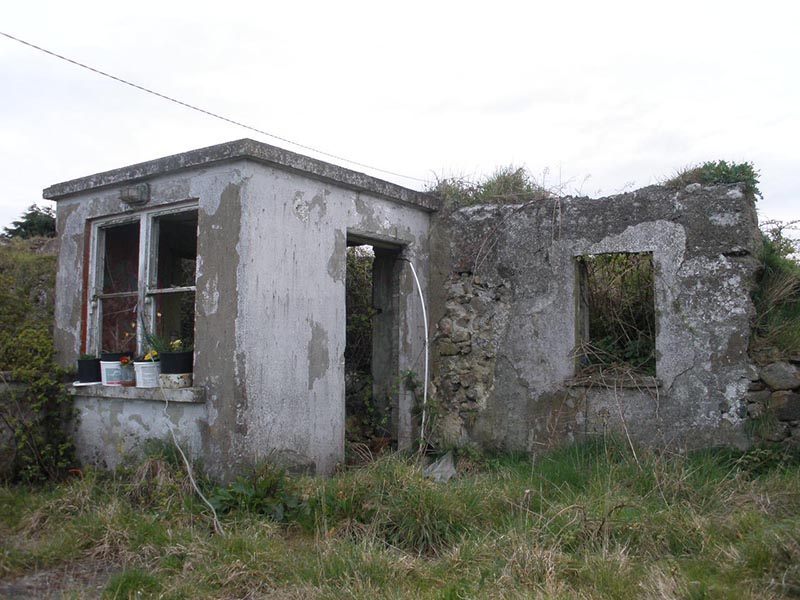 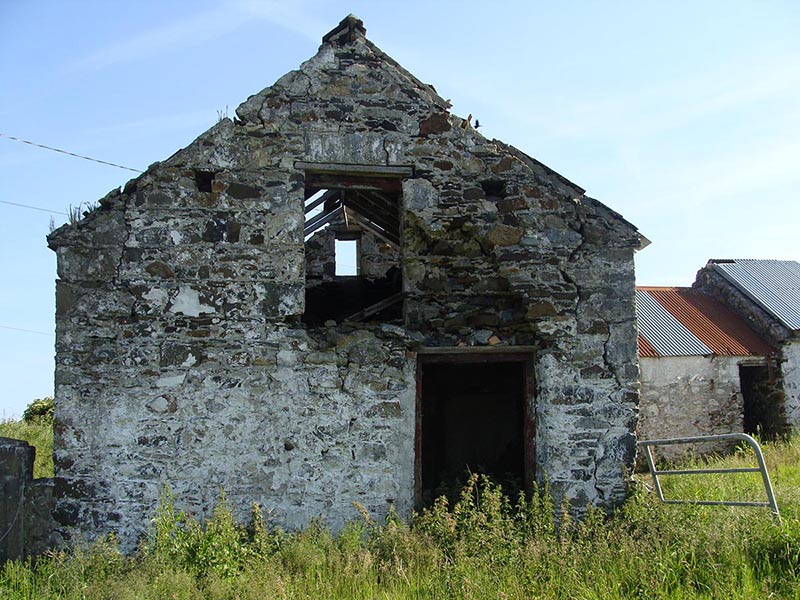